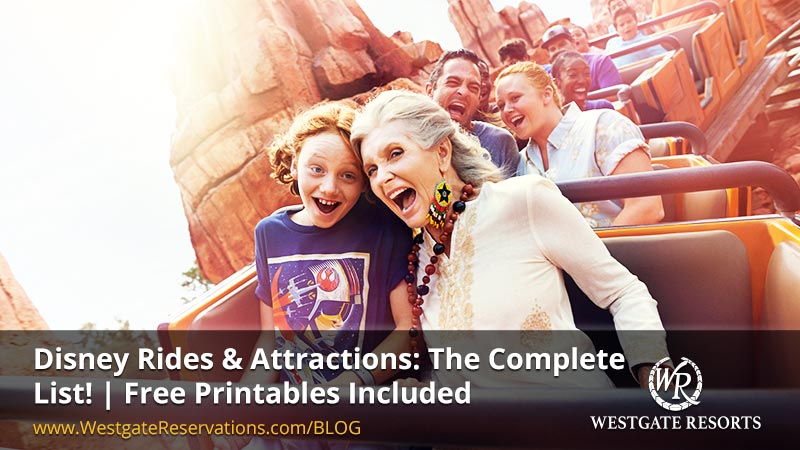 From timeless stories, fabulous fantasies and amazing adventures to high-flying thrills and live action shows, Walt Disney World Resort is filled with rides and attractions designed to make memories for the entire family. If you’re headed to Orlando, Florida for a Disney World vacation, you’ll want to take some time planning your strategy so you can make the most of your getaway and catch as many of your favorite attractions as possible. Disney World features four world-class theme parks, offering hundreds of attractions, activities, live shows, fireworks spectaculars and more.

Follow your Disney dreams to a place where storybook fantasy comes to life for children of all ages. Seek out adventures, create magical memories with beloved Characters and discover the fun where imagination reigns. From castles and pirates to favorite characters like Mickey Mouse and Winnie the Pooh, there’s something to match every child’s dream.

At Frontierland, you'll find Big Thunder Mountain Railroad, Country Bear Jamboree, Splash Mountain and Tom Sawyer Island while Liberty Square offers up The Hall of Presidents, Haunted Mansion and Liberty Square Riverboat. One of the most popular areas of Magic Kingdom is Fantasyland where you'll discover a wide range of special adventures, including The Barnstormer, Dumbo the Flying Elephant, Mad Tea Party, Enchanted Tales with Belle, "it's a small world", The Many Adventures of Winnie the Pooh, Peter Pan's Flight, Prince Charming's Regal Carrousel, Seven Dwarfs Mine Train, Under the Sea - Journey of the Little Mermaid and more. The sixth and final land is Adventureland and attractions such as Jungle Cruise, Pirates of the Caribbean, Enchanted Tiki Room and Swiss Family Treehouse. 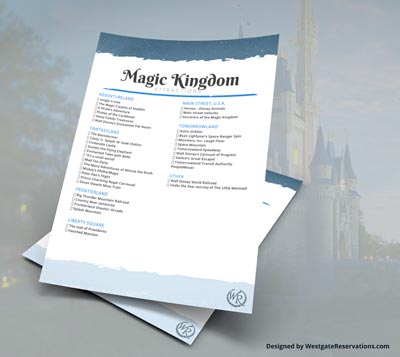 Celebrate the fascinating cultures and wonders of the world through dazzling shows, interactive experiences and amazing attractions at Epcot. Spread across 300 acres, Epcot is nearly twice the size of Magic Kingdom and is split between four distinct areas - World Discovery, World Nature, World Showcase, and World Celebration.

Designed around Walt Disney's vision of a futuristic utopia, Epcot is a unique experience offering both rides and an up close look at the cultures, foods and traditions of nations from around the world - including Mexico, Norway, China, Germany, Italy, Japan, Morocco, France, Canada, United Kingdom and the United States. One of Epcot's most popular attractions can be found in the Norway Pavilion where you can experience Frozen Ever After. You'll set sail aboard an ancient Norwegian vessel and head off to the wintery world of Frozen and Arendelle where you can meet Queen Elsa, Anna, Olaf, Kristoff and friends.

Meanwhile, World Discovery is loaded with rides and adventures like Mission: SPACE, a thrilling space launch experience, Test Track and the upcoming Guardians of the Galaxy: Cosmic Rewind, set to open May 27, 2022! World Nature, on the other hand, has classic favorites like Turtle Talk with Crush and Soarin' Around the World, a captivated airborne adventure that takes you hang gliding above some of the world's most breathtaking wonders. Other rides and attractions include Remy's Ratatouille Adventure (found in World Showcase), Spaceship Earth (found in World Celebration) and more. 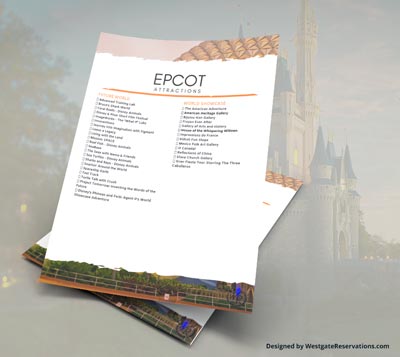 Disney storytelling comes to life in a kingdom brimming with fun, wonder and adventure – not to mention a lot of animals! Join together with your circle of loved ones to savor thrilling attractions, live shows, the majesty of nature and fascinating animals. From a 14-story, 50-foot wide Tree of Life with 325 animal carvings to the wild and woolly Expedition Everest roller coaster, thrills await you.

While Animal Kingdom features more than 2,000 animals from over 250 species, the park is much more than a zoo, offering a long list of rides and attractions across a number of unique areas and lands. The park centerpiece is found in Discovery Island where the Tree of Life towers over the park with its many animal carvings. You'll also find It's Tough to be a Bug inside the tree.

The newest area of Animal Kingdom is Pandora - The World of Avatar where you can journey into a spectacular, bioluminescent glow-in-the-dark rainforest in search of the Na'vi Shaman of Songs on Na'vi River Journey or ride on the back of a Banshee aboard Avatar Flight of Passage.

In the Africa section of the park, you won't want to miss the Kilimanjaro Safaris - offering a close-up look at the animals of the African plains. You can also enjoy Festival of the Lion King, wander down Gorilla Falls Exploration Trail and check out Rafiki's Planet Watch. Asia offers up attractions such as Finding Nemo the Musical, Maharajah Jungle Trek, Kali River Rapids, Expedition Everest coaster, and Feathered Friends in Flight! Meanwhile, the youngest of the family will love Dinoland U.S.A. and rides like TriceraTop Spin, Chester & Hester's Dino-Rama, and the Boneyard play area. And don't forget the thrilling DINOSAUR adventure that brings you face-to-face with a terrifying T-Rex. 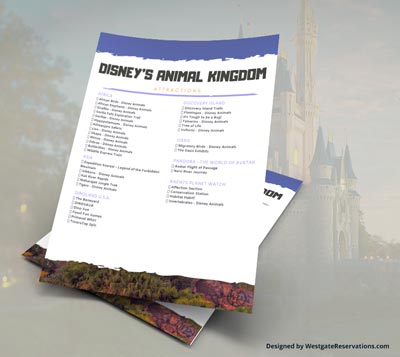 Salute the world of showbiz — from Hollywood classics to the best in popular entertainment. Take center stage as the star of your own adventure: from rock 'n' roll fantasy to Broadway-style stage spectaculars, from the silver screen to the TV screen to behind the scenes. From roller coasters and thrill shows to a behind the scenes look at the movies, the fun never ends.

One of the biggest highlights of Disney's Hollywood Studios is the attention given to space-themed Star Wars! In the Star Wars: Galaxy's Edge area of the theme park, you'll find Millennium Falcon - Smugglers Run, and the immersive Star Wars: Rise of the Resistance, where guests become heroes in battle with the First Order. Meanwhile, in Echo Lake area of the theme park, you'll find Star Tours - The Adventure Continues. 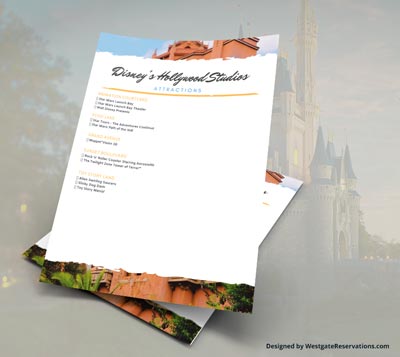 No matter when you plan to visit WDW, your best bet for a one-of-a-kind experience is to do some advance planning. Determine which Disney Parks and which must-do attractions you most want to experience. Do an in-depth review of height requirements, especially for thrill rides and dark rides. And take full advantage of your available FastPasses. You might also want to consider purchasing MagicBands to further simplify your Disney experience. And remember to save time for other Disney activities such as visiting Disney Springs or the two Disney water parks, Blizzard Beach and Typhoon Lagoon.

Say Goodbye to Disney Wait Times: Things To Do at Disney with No Lines!

Disney on a Budget: 50 Ways to Save on your Disney Vacation