HomeVacation BlogStar Wars: Galaxy's Edge - A Galaxy NOT So Far Away Anymore! 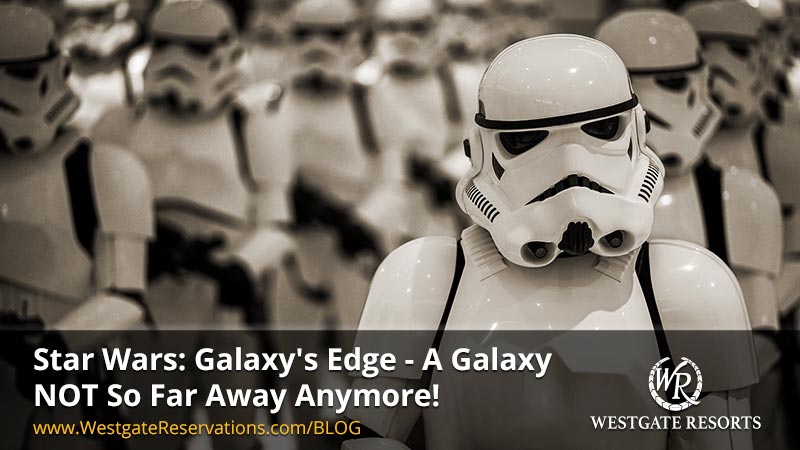 Now you can live your Star Wars adventure in a galaxy that's not so far away! Star Wars: Galaxy's Edge is an exciting new land at Disney's Hollywood Studios in Orlando, FL! Inspired by the Star Wars universe, the 14-acre area at Walt Disney World is an extensive expansion that will include Star Wars themed rides, shops, restaurants and unique entertainment experiences.

In addition to extraordinary rides and attractions, entertainment, and character greetings, this entire land will immerse you in a Star Wars universe straight out of the movies - the remote planet of Batuu, home to smugglers, rogue traders and adventurers.

Where is the Star Wars section located at Disney World?

Located inside Disney's Hollywood Studios, the Star Wars land replaced most of the park's Streets of America section as well as the surrounding backlot facades, shops and restaurants.

Do you need a special ticket to enter Star Wars: Galaxy's Edge?

Are there any interactive attractions at Star Wars: Galaxy's Edge?

With the Play Disney Parks App, you can turn your mobile device into a Star Wars Datapad and explore the planet Batuu, interact with door panels and droids, look inside cargo crates, translate signs throughout Black Spire Outpost, and more. The app will guide you deeper into the galaxy and help you uncover stories and secrets throughout the land. With each job you complete, you'll enjoy digital rewards including star maps, ship schematics and galactic credits.

What is the difference between Star Wars: Galaxy's Edge at Walt Disney World Resort and Disneyland Resort?

The rides and offerings are almost identical at Disney's Hollywood Studios and Disneyland Resort - featuring the same attractions, restaurants and shops.

You'll be immersed in Star Wars on this special flight simulator featuring 3D video and audio animatronic characters, plus in-cockpit special effects and music. You'll board a Starspeeder 1000, but when the ship mistakenly launches too soon, C-3PO takes the controls. Soon the ship is intercepted by Imperial Forces, sending you on a thrilling and unpredictable flight to the far reaches of the galaxy.

Explore exhibits of Star Wars costumes, models, concept artwork and movie props. You'll also enjoy a short documentary on the Star Wars creative team, explore a cantina and other settings inspired by the Star Wars Galaxy, and experience a meet and greet with Chewbacca and Kylo Ren.

A thrilling, 6-passenger motion simulator attraction, Millennium Falcon puts guests in the cockpit of Hans Solo's famed ship for an interactive smuggling mission with Chewbacca and Hondo Ohnaka at the helm. Each passenger will be assigned a role as part of the crew and you'll fly the craft like a giant video game. Beware, the worse you do on your mission, the more rocky and turbulent the ride.

This is the most immersive and advanced attraction ever imagined at Disney - putting guests in the middle of a battle between the First Order and the Resistance. You'll be recruited to join Rey and General Organa at a secret base and after being captured by a First Order Destroyer, you'll ultimately escape, protect the secret base and stay one step ahead of Kylo Ren.

More To Do at Star Wars: Galaxy's Edge

Bring your Star Wars and Disney dreams to life with a 3-day/2-night magical vacation package featuring luxury accommodations and 2 (one-day) tickets of your choice to Disney World. Our beautiful resort properties put you on the doorstep to Disney World and you can take advantage of our complimentary, scheduled shuttle to Disney. When you're not enjoy the theme parks, relax and enjoy a spacious villa with all the comforts of home and experience a wide range of fun-filled resort-style amenities and activities for the entire family!