Salute the world of showbiz Hollywood-style — from Hollywood classics to the best in popular entertainment. Take center stage as the star of your own adventure: from rock 'n' roll fantasy to Broadway-style stage spectaculars, from the silver screen to the TV screen to behind the scenes. From roller coasters and thrill shows to a behind the scenes look at the movies, the fun never ends.

Thrill enthusiasts can get their fill of fun on a coaster such as Rock ‘n’ Roller Coaster starring Aerosmith, a 0-to-57 mph in less than 3 seconds ride featuring the rock music of Aerosmith. Meanwhile, The Twilight Zone Tower of Terror takes guests up the 13-story haunted hotel elevator. When the cable snaps, you’ll be sent through a series of plunges, complete with plenty of visual and audio effects. Other favorite adventures include the sci-fi adventure Star Tours, Toy Story Mania, The Great Movie Ride, Muppet Vision, Pixar Place, Animation Courtyard, and For the First Time in Forever: A Frozen Sing-Along Celebration! Don't forget the nighttime spectacular, Fantasmic with it's pre-show, fireworks and laser lights. You can also find dine-in food and treats at a variety of locations around Echo Lake and throughout the park.

Offer available by phone only

How much are Disney’s Hollywood Studios tickets?

Tickets purchased at the gate are more than $100

As your authorized source for MyMagic Walt Disney World theme park tickets, you can safely and securely purchase your park tickets in advance. In addition to the great savings, you can also save time since you’ll avoid waiting in long, same day ticket lines at the park.

Buying your discount Disney World Resort tickets from an authorized ticket broker provides another distinct advantage – you can customize your Disney park visit by using Disney’s FastPass+ option. Fast Pass lets you to skip the standby line at some of the most popular attractions, shows and Character greetings. FastPass+ is included with your Regular ticket purchase.

This exclusive service is included in the price of your theme park admission. You can even check availability for your favorite “must-do” attractions and experiences and lock in up to 3 FastPass+ selections for each day at a single park. You can do it in advance – all from the comfort of home – when you purchase your discount tickets in advance! With a ticket, you can plan your FastPass+ selections up to 30 days in advance (an online registration is required, as well).

When you get to the park and enjoy your three FastPass+ attractions, you then have the option to make another selection at one of the many in-park kiosks or through your mobile device. Use that one, then get another (based on availability) – repeat as often as you can!

The cost of regular price Studios tickets can vary greatly depending on the type of tickets you purchase, the number of days you want to visit and the time of year. A one-day, one-park Disney ticket purchased at the gate is more than $100. Multiply that for an entire family and the cost adds up quickly.

Ask us about our other exclusive cheap admission discounts and see how much you can save off the gate price with our discount prices and specialty discounts. You can also ask about other Magic ticket options such as Park Hopper, Annual Pass, MagicBand bracelets, child tickets for those ages 3-9, non-refundable tickets, E-Tickets, Florida Resident, and blockout dates. Ask us about discount value season dates. 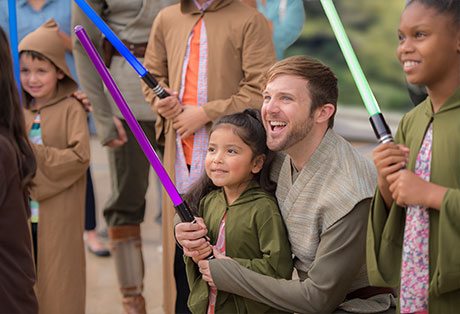 Some of most popular rides and adventures and stunt shows at Disney World can be found at Hollywood Studios, formerly known at Disney-MGM. Enjoy attractions like Tower of Terror and Toy Story Midway Mania. Or experience the delights of live shows, parades and more. Top shows include Beauty and the Beast: Live on Stage – an exciting Broadway-style retelling of the popular Disney hit movie. Stroll down Hollywood Boulevard or walk-through Sunset Boulevard, catch the Muppet show, or Voyage of the Little Mermaid and discover a variety of other exciting alternatives for the entire family. You can even enjoy a meet-and-greet with Star-Lord and Baby Groot from Guardians of the Galaxy Vol. 2. Be sure to capture all the memories with PhotoPass.

Star Wars fans will find plenty of live-action and backlot excitement in this galaxy far, far away. A wide range of Star Wars options are already available inside the park and an all-new Star Wars Land is under construction – the largest-ever, single-themed land expansion at Disney World! There's even an award-winning, state-of-the-art Star Wars themed fireworks extravaganza.

Know before you go

Children Under 3 are Free
Children under the age of 3 enjoy free admission to Hollywood Studios or any of the Disney theme parks. If you have booked multi-day tickets, you will not need to purchase a ticket for your child if they turn 3 during your trip, as long as they were two on the first day you visited the parks.
Pay to Park Once Per Day

Guests pay one fee for a parking pass good all day at all 4 theme parks—Kingdom Park, Epcot, Hollywood Studios and Disney's Animal Kingdom theme park. Cost is $20 per car or motorcycle or $40 for preferred parking. Designated parking areas are available throughout Walt Disney World Resort for guests with a valid disability parking permit.

One convenient way to avoid the cost of parking at Walt Disney's parks is by taking advantage of Westgate Resorts’ complimentary, scheduled shuttle service. There’s no easier way to travel back and forth between the resort and Walt Disney World.

Pack your own food

Magic Kingdom Park guests are allowed by bring food items into the park, including snacks and foods that do not require heating. You may also bring beverages such as juice boxes and water bottles. Once in the park, you can also obtain an ice cold up of water for free at any counter service restaurants. Stay hydrated!

You can’t bring that!

How many tickets can I buy at a discounted price?

Some of our Disney vacation packages include 2 adult, one-day tickets to Disney’s Hollywood Studios. Additional tickets may be purchased at a discount and added to your package. You can also add days at the Disney World Water Parks Blizzard Beach and Typhoon Lagoon, Epcot, Animal Kingdom, Magic Kingdom, as well as other parks such as SeaWorld, Aquatica, Universal Orlando, Universal Studios Florida, Legoland, and more.

What does a Disney’s Hollywood Studios ticket include?

The base ticket includes admission to Disney’s Hollywood Studios for single-day. You can also ask about Peak tickets, value tickets, Magic Your Way base tickets and other options.

Is there an additional charge for shows and attractions inside the park?

No, all attractions, shows, rides, parades, etc. inside the park are part of your gate admission. The only additional costs would be for food/beverages, table-service meals, and incidentals such as a stroller rental or souvenirs.

Disney one-day base tickets expire 14 days after their first use unless you purchase the No Expiration option.

I need to buy tickets for other theme parks. Can I upgrade my package?