From Magic Wands to Butterbeer 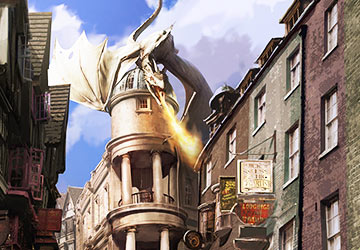 Diagon Alley is a re-creation of the magical shopping district where Harry Potter and other “wizards” shopped for magic wands and other essentials. The expansion was created in the space previously dedicated to the Jaws ride at Universal Studios and features a wide range of shops and eateries made famous in the Harry Potter series. Guests can purchase everything from interactive wands that initiate special effects, to Butterbeer-flavored ice cream.

The book and film series captured the hearts of millions and now, The Wizarding World of Harry Potter is the only place in the world where the wonder, excitement and adventure comes to life. Where else can you ride on a dragon, eat exploding candy and experience wizard Magic?

From the entrance to Hogsmeade, with the Hogwarts Express billowing steam and whistling its arrival, through each shop and attraction, The Wizarding World of Harry Potter at Universal Orlando Resort is a one-of-a-kind, fully immersive theme park experience and the only place in the world that brings the magic of Harry Potter to life. Guests can explore some of the most significant and familiar locations from the books and films and find themselves in the heart of the excitement. Harry’s journeys will become their own.

The 20-acre area includes the village of Hogsmeade featuring Zonko’s joke shop, Honeydukes, the Three Broomsticks, the Hog’s Head pub, the Owlery and Owl Post, Ollivanders and Dervish and Banges. Just beyond Hogsmeade is Filch’s Emporium of Confiscated Goods and three attractions that place guests right in the middle of Harry’s world: Dragon Challenge, Flight of the Hippogriff and located within Hogwarts castle, Harry Potter and the Forbidden Journey.

HARRY POTTER AND THE ESCAPE FROM GRINGOTTS™ – Enter Gringotts™ bank beneath the massive fire-breathing dragon at the far end of Diagon Alley™, then you’ll walk through the bank’s grand marble lobby and see goblins hard at work. The adventure continues as you take a journey through cavernous passageways leading deep underground as you climb aboard Harry Potter and the Escape from Gringotts™. This multi-dimensional 3D thrill ride puts you in the middle of the action, facing the bank’s tough security measures while navigating the underground vaults. Along the way, you’ll encounter Harry, Ron, and Hermione, as well as having to face malicious villains like Voldemort™ and Bellatrix plus trolls and other creatures.

DIAGON ALLEY™ SHOPS – Pass through the brick archway and you’ll find yourself in Diagon Alley™, the iconic, cobbled street where witches and wizards have shopped for hundreds of years. Explore some of the most famous shops and retailers in the wizarding world such as Ollivanders wand shop, Weasleys' Wizard Wheezes, Borgin and Burkes, Madam Malkin's Robes shop, Magical Menagerie, Quality Quidditch Supplies and more.

THE LEAKY CAULDRON™ – The Wizarding World of Harry Potter™ – Diagon Alley™ offers a variety of delicious British food, plus authentic fare found in the Harry Potter™ books and films. Try restaurants such as the Leaky Cauldron, Florean Fortescue's Ice Cream Parlour and a variety of street vendors offering things like butterbeer and pumpkin juice.

All Aboard The Hogwarts Express

All you need is a Universal Park-to-Park admission ticket (for entrance to both Universal Studios and Islands of Adventure). Then, you can pass through Platform 9 ¾™ and board the Hogwarts™ Express* from King’s Cross Station in London, located inside Universal Studios Florida® theme park, and be magically transported to Hogsmeade™ Station, located inside Universal’s Islands of Adventure® theme park. Of course, you can ride the train in the other direction, as well – a unique and seamless journey that offers the best of both Harry Potter worlds.

Hogsmeade to London - Board from Hogsmeade inside Islands of Adventure, and from the Hogwarts Express train windows, you can enjoy the scenery of London as well as the magnificent British countryside. But stay alert as you will also enjoy enchanting encounters with some of the characters featured in the Harry Potter books and films. You may also encounter a bit of mischief before arriving at your final destination of Kings Cross Station in The Wizarding World of Harry Potter™ — Diagon Alley™, located inside Universal Studios Florida®.

London to Hogsmeade - “Muggles” who choose to board the Hogwarts™ Express at King's Cross Station inside Universal Studios, will walk straight through a solid brick wall onto Platform 9 ¾™ where they will find the train. From there, a Hogwarts™ Prefect will be waiting to lead you to your passenger compartment. The iconic steam engine train will take guests through the urban outskirts of London to the village of Hogsmeade™, where you can explore the area where Harry Potter went to school and his life at Hogwarts. As the train winds through the British countryside, be sure to keep an eye outside your window. You never know who, or what, you might see flying or lurking outside. 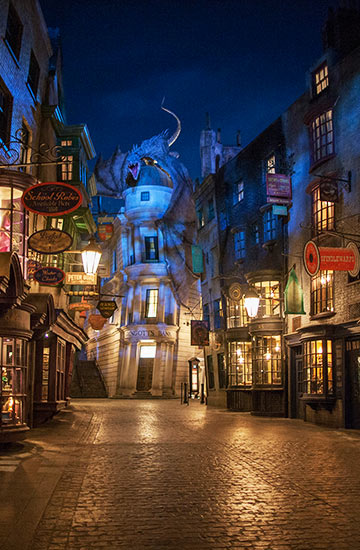 Experience two exciting and uniquely different areas of The Wizarding World of Harry Potter! Now there are two different lands - one located in each of Universal's two amazing theme parks - and both are linked by a special ride aboard the iconic Hogwarts Express train.