Where Movies Come to Life 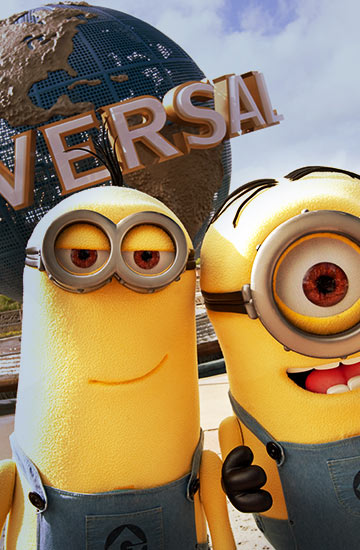 Universal Studios Orlando Florida features cutting-edge rides and attractions based on pop-culture icons, Hollywood blockbuster films and hit television shows. Experience the fun and transport yourself into a highly imaginative world where you can leap through the screen and become the star.

The Wizarding World of Harry Potter

This 107-acre theme park opened in 1990, but Universal continues to add exciting new attractions. The mega addition is the Wizarding World of Harry Potter – Diagon Alley! Based on the blockbuster series of “Harry Potter” books and movies created by J.K. Rowling, Diagon Alley is an amazing re-creation of the magical shopping district where Harry Potter and other “wizards” shopped for magic wands and other essentials.

The attraction features a wide range of shops and eateries made famous in the Harry Potter series. You'll also find the Hogwarts Express, a magical train ride that transports guests between Diagon Alley and the original Wizarding World of Harry Potter inside Universal’s Islands of Adventure.

There’s never a dull moment at Universal Studios Orlando Florida and the entire family will love Universal’s Superstar Parade. This daily parade offers guests the opportunity to sing and dance with some of their favorite characters, including Nickelodeon’s SpongeBob SquarePants and Dora & Diego, the minions from Despicable Me, and E.B. from the hit comedy, Hop.

And you won’t want to miss 100 Years of Movie Memories, narrated by Academy Award-winner Morgan Freeman. Universal’s Cinematic Spectacular is a special nighttime show that celebrates the most powerful and emotional moments from Universal Pictures’ most iconic films, all on cutting-edge waterfall screens within the Universal Studios lagoon and surrounded by colorful fountains and pyrotechnics.