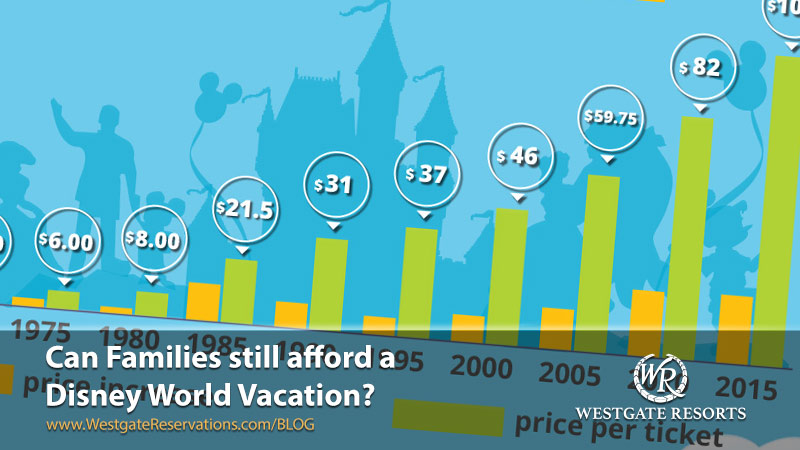 Walt Disney World has announced a ticket price increase for Magic Kingdom theme park that raises the price of a single, one-day park admission above the $100 mark. That also raises the question –“Can families still afford a Disney World vacation?”

Additional increases continued to occur annually with the price jump moving from $2 to as much as $4, with the cost of a ticket jumping to $89 by June, 2012. In just the past three years, the price jumps have been even larger – driving up the price of a one-day Magic Kingdom admission a whopping $16 dollars to its current $105 value.

Another option is to find a vacation package option that includes Disney tickets. For example, some Orlando resorts offer exclusive accommodations close to Disney World and tickets, all for one low price.

Families can also spend fewer days in the theme parks and still take advantage of other Disney experiences that are available for free. You can spend hours at Downtown Disney, exploring the marketplace and shops. You can visit Disney Resorts and hunt for “hidden Mickeys.” Or go on a free 45-minute walking tour of Animal Kingdom Lodge and it African Safari area. You can stroll along the Disney Boardwalk, an entertainment complex with a peaceful mile-long walk around a small lake.

Another way to save is on food. Disney park prices can be expensive. So try eating a big breakfast before you enter the park. You might also consider packing sandwiches or a small lunch and water bottles or small snacks.

You can also save by planning ahead. Make the most of your time in the theme parks by signing up for our Disney insiders Guide below, or by utilizing park maps and other information that can help you get around the park more efficiently so you can see the attractions you most want to experience.