HomeVacation BlogA Look at Family Travel for the 2017 Holiday Season 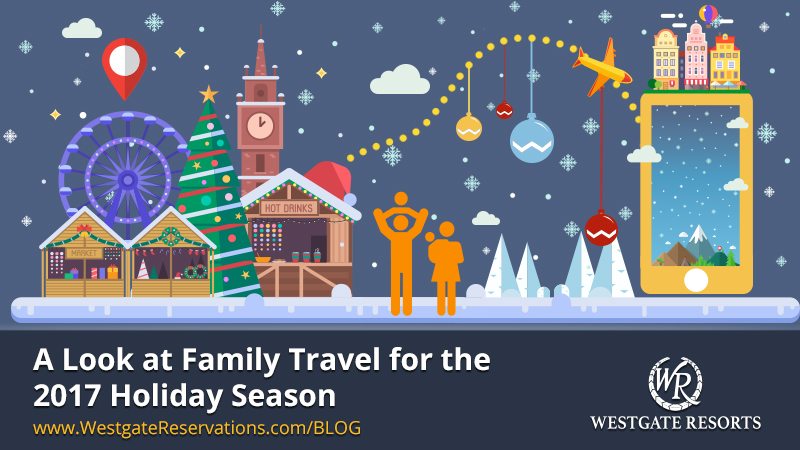 Family traditions during the holiday season are as varied as the people who celebrate them. Whether going on a trip cross-country or cozying up by the fire at home, one holiday planning detail is consistent: spending time with loved ones. As the modern family fills up its home with more and more things, the idea of an influx of material possessions on Christmas morning or during the eight nights of Hanukah seems to be getting less appealing. In fact, 75 percent of millennial parents favor experiences over gifts for themselves and for their kids.

Taking a family trip is a great way to experience the holidays with your kids, and maybe even with members of your extended family. Let’s look a little closer at family holiday travel trends and what we can expect in 2017.

Holiday Travel by the Numbers

INFOGRAPHIC: A Look at Family Travel for the 2017 Holiday Season – Designed by the team at Westgate Reservations

Americans spent $683.1 billion on travel in 2016, according to USTravel.org, with 4 of 5 trips taken for leisure purposes. The top five reasons for travel were visiting family, shopping, visiting friends, going out to eat and rural sightseeing. An estimated 2.7 percent of the U.S. Gross Domestic Product is generated by travel and the travel industry, and travel charts in the top 10 industries for employment in 49 of the 50 states.

The top five reasons for travel were visiting family, shopping, visiting friends, going out to eat and rural sightseeing.

Where Families Travel during the Holidays

According to AAA, 48.7 million Americans traveled 50 miles or more from home during the 2016 Thanksgiving holiday weekend, which started the Wednesday before and ended the Sunday following the actual holiday. That was an increase of 1.9 from the year prior. During Thanksgiving, 89 percent of travelers drive to get to their destinations. Air travel represents just 1.6 percent of Thanksgiving weekend travelers and all other transportation means, including trains, cruises and buses, account for less than 1 percent of Thanksgiving travelers.

During Thanksgiving, 89 percent of travelers drive to get to their destinations.

Travel during the 2016 end-of-year holidays in that include Christmas, Hanukah and New Year’s celebrations reached a record-breaking 103 million Americans, an increase of 1.5 percent from 2015. AAA estimates that of those travelers, 93.6 million drove to their destinations. Just 6 million flew, and 3.5 million took other forms of transportation. The top destinations for holiday travel included Las Vegas, Orlando, New York City, San Diego and Anaheim.

So what does all of that mean for travelers this 2017 holiday season? AAA has forecast that 42 percent of Americans will take a vacation in 2017, with one-third saying they are more likely this year to travel than in 2016.

The U.S. Department of Transportation reports that the average amount of miles traveled during the Thanksgiving holiday weekend is 214, compared with 275 during Christmas and New Year’s. Half of holiday travelers in 2016 made same-day trips home, with the other half opting to stay with family/friends or in a hotel. Of long-distance trips made during the holiday season, just 3 percent are long-distance.

Statistics on actual travel dates are interesting, too. It turns out that Thanksgiving Day is actually a busier travel period than the day before or the three days after it.

Who Travels during the Holiday Season?

The average age of Thanksgiving travelers is 34 and that number rises to 36 for Christmas and New Year’s travel. That’s actually two years young than the rest of the year, when the average traveler age is 38. Men make up 58 percent of travelers throughout the year, but that drops to around juts 50 percent during the Thanksgiving and Christmas holidays.

As family life seems to get busier each year, parents are looking for ways to plan meaningful vacations. At the Family Travel Association Summit in Tucson this summer, panelists discussed an increase in multigenerational travel, where grandparents go along for the ride to celebrate milestones with their kids and grandkids. Some other themes for family trips that are trending in 2017, according to U.S. News & World Report, include visits to National Parks, history-driven trips, “unplugged” experiences, journeys that immerse kids in a totally new culture, and trips to the Caribbean and Central America. Families want vacations that are about more than just fun. An educational component drives decisions on where to plan a flight and book a hotel.

Millennial parents, or those in the 18 to 34-year-old age bracket, now represent 53% of all parents. They are even more likely to take their kids on trips instead of spending money on other material things. Seventy-five percent of millennials say they place experiences above things in their value systems.

Despite an increase in lodging options for families, including a rise in app-fueled owner rentals, the hotel industry in the U.S. has grown its revenue over the past few years to nearly $190 billion at the end of 2015, per Statista. Part of that increase can be attributed to a rise the use of mobile apps for hotel bookings, up 67 percent in 2017 from 2016, according to a HotelsCombined study. The most popular time for Americans to tap hotel booking apps is 48 hours before checking in (72 percent of bookings via app happen then), followed by 40 percent of app bookings happening on the same day as check in.

The National Retail Federation predicts retail sales for November and December to climb as high as four percent to $682 billion. U.S. consumers will tap online shopping options to complete 40 percent of their holiday buying tasks, and that number is significantly higher for booking travel details, per The NPD Group. While travel predictions for the holiday season aren’t usually available until early November, a healthy economy paired with low gas prices and the millennial desire to tap experiences during the holiday season is setting the scene for a strong holiday season for travel.

Where will you travel this year?